How to make your fundraising ask more effective — according to research, not hearsay

Story review
A story progresses through

Effective fundraising story hinges on the donor’s action – the gift. Thus, the donor is a main character. The donor’s story can progress through these same story steps.

Donor story: Inciting incident
The donor will face a challenge. This challenge is the donation request. In an effective fundraising story, the challenge must connect to a victory.

Or worse yet, the charity never actually makes the ask. It just does good work. It hopes that people will automatically donate. That story cycle has no challenge.

Consider the highest-grossing movie franchises. In The Matrix, the choice is simple. Take the red pill or the blue pill. In The Hobbit, it’s also simple. Go on an adventure or stay in the shire. In the original Star Wars, the choice is similar. Stay on the farm or go to Alderaan to help the princess.

These challenges aren’t vague. These aren’t challenges to, “Please do whatever you can.” They are simple and specific. They are either yes or no.

A specific ask for a specific amount works. But for the fundraiser, it can be scary. What if you guess wrong? What if the amount is too high – or worse, too low?[1] What if the project was the wrong project for this donor? Getting it right requires a lot of information. Sometimes, that just isn’t feasible.

What then? Fortunately, there is another answer. You’ll find it at any restaurant.

Menus can be clear and simple
Suppose you visit a new restaurant. Instead of handing you a menu, the waiter says, “We cook good food. So, just give us some money. Then we’ll go figure out something to cook.”

This would be strange. But it’s a bit like some charities’ approach to fundraising. Their message is, “We do good work. We need money. So, people should give us some. Then we’ll do something good with it.”

Research: Menus of causes and projects
In research experiments, menus can sometimes help. In one, some people could give to any charity. Others had to choose from a list of only five charities.[2] With only five options, the share of people giving more than doubled.

Menus simplify the choice. They avoid analysis paralysis.[3] But even menus can get too complicated.

One experiment asked people to volunteer at a charity. Increasing the number of charity options from 10 to 30 actually reduced volunteering.[4] Another found that giving increased when people could choose from 8 charities rather than only 3. But increasing from 8 to 16 charities didn’t help.[5]

Having some options helps. Having too many options hurts. 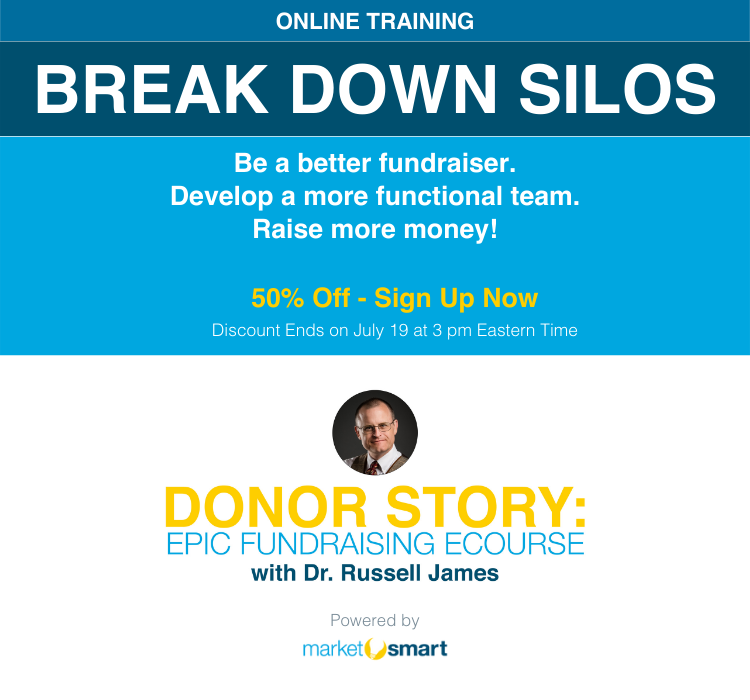 A menu can also help with another fundraising issue: asking too small. A menu helps by showing other levels. If we’ve guessed wrong on the amount, other options are nearby. Recommending the hamburger? Okay, but the filet mignon is still right next to it on the menu.

Asking for $50,000 to run a program for a year can work. But why not put it on a menu? It can go beside the option of $1 million to permanently endow the program.[9] Listing charitable gift annuity rates is fine. But showing options with lower rates creating bigger donations is smarter.

Even the classic campaign donation pyramid is a menu. Requesting a gift from the pyramid

Research: Menus with large amounts
One experiment tested the effects of including a larger option.[10] The experiment used 60,000 fundraising appeal letters from a hospital. The standard letter followed the charity’s normal practice. The response card used the three most common gift amounts:

The second version raised twice as much money per letter. But another, relatively strange, version worked just as well. This had suggested amounts of only

In both cases, including the higher amount worked better. But this is not the same as increasing all of the options. Increasing the smallest option has a downside. It makes a smaller gift seem unacceptable. This can reduce the share of people who give at all. Experimental results confirm this. One study with 10,000 public TV station members found, “in three independent comparisons, increasing the entire vector of suggested amounts by 20%–40% reduces the probability of giving by approximately 15%.”[11]

One experiment found a way to interfere with this. People prefer to give round numbers. Removing this option frustrates simplicity. Replacing $100 with $95 causes people to avoid this option. A direct mail experiment changed the suggested amounts from,

The result? People avoided the unusual option. The researchers explained, “changing one of the suggested amounts in an ask string from $100 to $95 reduces the number of gifts greater than or equal to $90 by more than 30%.”[12]
Menus work because they make the response simple. Of course, requesting one amount is simpler still. One experiment asked for small gifts for nature conservation. This was at the end of a tourist experience.[13] The share of people agreeing to give was:

The open-ended request was the worst. A menu worked better. A specific amount worked the best. But the specific amount had a trade-off. Asking for more increased the chance for a “no.”

“Tricks and traps,” or delivering value?
It’s fun to learn the tricks that bump up giving responses. It’s fine to focus on making the perfect ask. But the story can’t end at the ask. If it does, donors might still give. But they’ll only do it once.

After all the tricks, the donor experience was either worth the gift or it wasn’t. And if we look at how real donors behave in the real world, mostly it wasn’t. Donors test many charities. Most fail the test. Over 70% of first-time donors to a charity never give to that charity again.[14]

Conclusion
The right environment or framing can help. It can improve the challenge. It can make it more compelling. But if

The challenge doesn’t ultimately lead to a victory, or

The victory doesn’t ultimately deliver enhanced identity, then, it’s unlikely to be repeated.

A charity can just take the money. It can deliver nothing to the donor in return. It can then hope the same tricks work the next time. But there is another option. After receiving a gift, a charity can finish the story. The next article looks at this.

Footnotes:
[1] Sometimes, this risk may be softened by a request with a floor. For example, a request could ask for “your best gift ever.” This has a floor of the donor’s previous largest gift. However, phrasing can be tricky here. Asking for a gift of “at least” a certain amount devalues the target amount. It suggests that the amount is a meager, marginally acceptable response. Giving that amount is tolerable but doesn’t fully meet the challenge. This makes the specific request less attractive. Because it uses devaluing language, it can also cause offense to those who feel that their contributions are not being appreciated.

[7] However, donations increased when donors could split gifts among multiple projects. In that case both total money and the propensity to donate increased when the number of project options increased from 7 to 13. In this case, donors no longer had to choose the single “best” option but could choose to give something to all the projects they liked.

[9] If your organization is relatively new, consider establishing this fund through a local community foundation to enhance the feeling of permanence and stability.

See also, “’Over 70% of people that we recruit into organizations never come back and make another gift, so we’re caught on this treadmill where we have to spend lots of money on acquisition which most nonprofits lose money on anyway, just to stand still.’ Professor Adrian Sargeant” from https://bloomerang.co/retention